This blog is aimed primarily at learners of English of all backgrounds and abilities.

So grab a cup of tea / coffee and start browsing through the articles :-) I hope that you'll find something useful here! 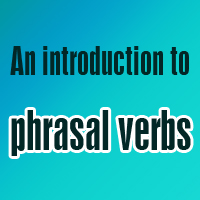 Do you find learning phrasal verbs difficult? Would you like to know more about them, and how they are used? Phrasal verbs are a very important part of the English language. So how do you best learn them? Underlined words are explained at the bottom of this post.

What are phrasal verbs?

A phrasal verb (also called multi-word verb) consists of two parts; a verb and a particle (preposition / adverb, or a combination thereof).

Compare these two examples:
Verb sentence: Norman takes his coat.
Phrasal verb sentence: Norman takes off his jacket. (Norman removes his jacket from his body)
In the second example, the meaning of the sentence is completely different. The particle (in this case off) changes the meaning of the verb. Quite often, there is a single-word verb which means the same thing as the multi-word verb. In the example above; take off = remove. Especially for beginners, English phrasal verbs can be very difficult because it is often not possible to translate the phrasal verbs literally.

When and how are phrasal verbs used?

Phrasal verbs or multi-word verbs are mostly used in spoken English and informal writing. Using phrasal verbs in conversation brings you one step closer to sounding like a native speaker.

There are four types of phrasal verbs:

Caution! Sometimes what looks like a multi-word verb isn't one at all, but rather just a verb and a preposition. It depends on the context.

Example:
Jane looked up. (Here the preposition up just describes the direction in which she looks. No phrasal verb)
Jane told me that things are looking up again. (Here, to look up is a phrasal verb, meaning her situation is improving again.)

How do I best learn them?

A good way to become more familiar with phrasal verbs is to look for them when you read something. Underline them and guess or look up their meaning.
As a rule of thumb you could say that phrasal verb are a bit more informal and often used in conversation. Their single-word verb counterparts on the other hand are slightly more formal.

There's no way around it, start learning phrasal verbs now! :-)

Vocabulary (in order of appearance)